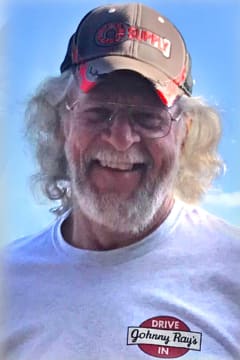 It is with heavy hearts that we share the news that William Wayne Campbell, 72, known only as “Wayne Campbell” to all, passed away Wednesday, June 2nd, 2021. Wayne was born on December 28th, 1948 in Sedalia, Missouri.

He grew up in Green Ridge, Missouri and graduated from Green Ridge High School in 1966. He was the son of Bill and Marsha Campbell, who both preceded him in death.

On November 18, 2006 in Centerview, Missouri Wayne was joyfully united in marriage to Elaine Campbell, who as he said “saved him”, and still resides in the home.

Wayne had many careers and hobbies over the span of his life. He was involved in The Good Guys Group, loved Greaserama, going to the PRI show with his buddies and was a member of AA for 32 years. In his early career he was a sheet metal worker in KCMO, then he opened a body shop and was involved in the used car business, in Sedalia, Missouri. Wayne also founded the “Coliseum Indoor Winter Speedway Kart Racing Series” at the Missouri State Fairgrounds in Sedalia, Missouri and was involved in racing all his life.

Drag racing, sprint car racing, and cruising with his old Pontiac were passions for Wayne that he shared with all. He fielded several sprint cars with different drivers and helped numerous people with their cars. Through these outlets he made many, many friends who will all miss him dearly.

Wayne is survived by his wife Elaine; sister, Ranae Smith (Jim) of Sedalia, Mo; children, Kelly Campbell (Amy) of Sedalia, Mo, Dean Bowers of Knob Noster, Mo, and Tina Mills (Kelly) of Aurora, Mo. He also had several grandchildren that he was constantly bragging about including; Morgan Campbell, WJ Campbell, Blake Bowers, Riley Mills, and Landry Mills, along with several nieces and nephews.

Wayne had a very active social calendar that involved many, many, friends and buddies.

All are invited to the Celebration of his Life on Sunday June 13th, 2021 at the Sedalia Shrine Club, in Sedalia, Missouri beginning at 2:00 pm. There will be a BBQ dinner, please come hungry. (Wayne would) The family asks that you bring all your stories and laughter to share as we celebrate Wayne’s life and leave the tears at home. The dress code is casual (think jeans and race car t-shirts). Wayne would not want it any other way.

Flowers can be sent in care of Rea Funeral Chapel in Sedalia MO.
In lieu of memorial contributions the family asks that you buy tickets to a race this summer for you and your loved ones to enjoy the evening together. Wayne will be there with you.

Prayers to the family. It was great knowing Wayne. Cass Roberts and Ginny McTighe
- Cass Roberts
Sorry for your loss! Enjoyed hanging out and visiting at the sprint car races. Praying for peace as you celebrate his life and in the days to come.
- Mark Knapp
You will be missed. Our mornings at McDonald's in Warrensburg for coffee will be remembered forever. You attitude, sense of humor and stories will last forever in my mind. Thanks for the friendship. My condolences to the family.
- Mark Lenger
I cruised the strip with Wayne and Gaylon Craig a lot of nights in Wayne's Riviera had lots of good times and laughs, though we did not see each other much later in life, when we did we could start up like it yesterday 😢
- Hugo Dennis
Sorry for your lose , RIP Wayne .
- Bobby Snow
Ranae and family! So sorry to hear about my life long Friend. The 4 of us must have been 3 or 4 when we played while our parents played Pitch every Saturday night. Wayne was my other brother and involved me in all the Fun stuff. We spent a good part of our relationship at the tracks all around Missouri and Iowa. But most importantly he was my friend. When I went through some heavy medical issues guess who was one of the first to reach out to me? Love to all Rick Williams
- Rick Williams
I'm so sorry to hear of Wayne's passing. I always enjoyed seeing him at the track and he always had a smile and a hello as well as a little conversation. I will miss seeing him at the track
- Rick Smith