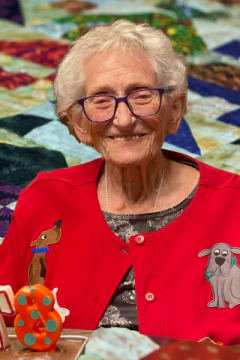 Wanda Lee Braden, 87, of Sedalia, MO, went to be with the Lord, while surrounded by her family, on Friday, July 3, 2020 at her home. She is the daughter of Ray and Winona (Goodno) Lamb, who preceded her in death.

Wanda Braden was a feisty fighter from the start. Born on February 17, 1933 in Bronson, KS in the Lamb family home where she lived with her grandmother, parents, big brother and sister. At birth Wanda was so tiny her grandmother wrapped her in flannel, placed her in a shoebox and set her on the woodstove. She endured and grew strong, though her nickname was PeeWee. She had chores to do on the farm; gathering eggs wasn’t much fun but milking the cow was the worst. It would hit her in the face with its tail and though Wanda would want to curse that wasn’t allowed, so all she ever said was “That darn cow.” Wanda would ride a pony to school at Dry Ridge, wearing her glasses and with long, dark and curly hair.

When country school was completed, she went to high school in Bronson to complete her schooling. After graduation she worked as an office girl in Fort Scott, KS. During this time she had a pen pal who was in the Navy. The two would later marry and have two children: Peggy Frey of Lee’s Summit, MO and Patricia Himes of Sedalia, MO. The family lived for many years in Stover, MO where Wanda worked at Smithson’s Quilting factory and later at Gates Rubber Company. She was a member of First Baptist Church of Stover.

Wanda’s greatest joy was her grandchildren and great-grandchildren of which she had five and seven by birth, respectively, and even more by marriage whom she loved without reservation as if they’d always been hers. Grandchildren, Adam Himes (Jessica), Amy Frey Miller (Chase), Susan Frey, Aaron Himes, Emily Boeger (Jeff); Great-grandchildren Kindle, Cooper, Theodore, Stetson, Raylee, Hayes, and Lincoln.

To them and to so many she was simply Moe Moe or MoMoJo as depicted on the license plate of her car. She was a regular figure in each of their lives, cooking and baking for them, attending their many games, plays, and various activities. Red velvet cakes, cookies, spaghetti sauce, and the best chicken and noodles ever made were just some of the amazing things produced in her kitchen. Moe Moe was always ready to deal cards for a game and hand out some candy, putting thousands of miles on her car driving Grandkids around or going to visit them. Moe Moe passed on her love of dogs to every one of her descendants and had many beloved dogs and grand-dogs throughout the years.

Besides her parents, she was preceded in death by a brother, Robert Lamb and a sister, Shirley Toon.

Memorial contributions are suggested to The Sedalia Animal Shelter in care of Rea Funeral Chapel.

So sorry for your loss girls. Wanda was a great neighbor and when we worked at the factory in stover we always had a good time. May she rest in peace
- Brenda Cook
Dear Peggy and familyso sorry for your loss. Grandma's and Mom's leave a big hole. Sending loving thoughts and prayers.
- Becky Abbott