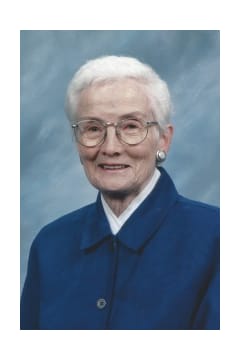 Sarah Ellen "Sally" Tompkin, 92, passed away July 23, 2019 at Cedarhurst Enhanced Assisted Living in Sedalia, Missouri. She was born at home on December 25, 1926 in Doland, South Dakota the daughter of John L. and Lucy Lair Fargo Long.

Sally ran track, played music and was salutatorian at Redfield High School. She graduated from the University of South Dakota, where she was president of the Kappa Alpha Theta sorority, and a member of the Women’s Rifle Team.

Sally volunteered as a Cub Scout den mother, a PTA member and a Sunday School teacher. She was also an active member of the United Methodist Women and Sorosis. Sally was a voracious reader and loved to play cards.

When their children were older, Sally and her friend Marge Meyer took the required classes at Warrensburg to renew their teaching credentials, and began new careers as elementary school teachers. Sally enjoyed her work as a 5th grade teacher at Smithton Elementary School, until she retired in 1991.

The family thanks the kind employees at Cedarhurst Assisted Living, and Sally’s aides Ruth Anne Belsha and Diane Woodington. Memorial contributions may be made to those charities which help women and children in need, such as United Methodist Women, and the Native American Heritage Association, South Dakota.

A Celebration of Life service will be held at 2 p.m. Sunday, September 1st, 2019 at the First United Methodist Church Celebration Center, 1701 West 32nd Street, in Sedalia, Missouri. Sally’s children invite all her friends, former co-workers and students to attend.

Arrangements are under the care of Rea Funeral Chapel.

Sally was Sally Long to me all through the Redfield, SD schools. We were in some same classes, particularly Band. I don’t do any of this social stuff like Facebook, etc or I would send some pics. Sally was a dear friend. I hope our spirits meet again. Bill Gleason. Oceanside, Ca 92054. 2143 Foster Street. I am approaching 94 in May.
- Bill Gleason
I said all I could with the above. My memory of both Sally and Norbert is vivid.
- Bill Gleason
Sally and I went to school together at Redfield, South Dakota, both graduating in 1944. I knew Norbert also. Sally was in all sorts of activity, but I new her best from band. I went from high school directlyinto the Navy.. sally was the last girl I saw before WWII. She was a dear. I am sorry she is gone. I am 93 and live at home with one son. I will join her some day and be glad to see her.
- Bill Gleason