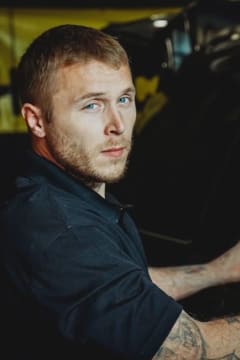 Robbie loved music. He was a fan of many types of music including classic country music such as Hank Williams, Jr, Merle Haggard and Waylon Jennings. He also enjoyed music such as Guns N’ Roses, Five Finger Death Punch, and Pantera. Surprisingly unknown to many, he also loved opera, especially “Ava Maria.” He hoped one day to attend an authentic Italian Opera with his mom.

He loved his grey truck and spent many hours customizing the truck into the pride of his eye. He loved to ride motorcycles and will be escorted to his final resting place by several fellow riders. He was a member of the BCA pool league in Sedalia and participated in several tournaments.

Rob spent many childhood hours under foot with his dad and brother at construction sites and grew into a fine drywall professional, eventually taking over the business Bemiss Drywall, Inc. for his father.

Most of all, Robbie loved his children and family. There wasn’t a thing he wouldn’t do for his family. Be it a brand-new fence, digging a tomato garden, starting a tree-house with ALL of the kids, being the clown for birthday parties, car repairs or helping the elderly neighbors with yard and garden work - He was always there and ready to help.

Rob loved to cook and was a connoisseur of fine teas. He loved a smart cup of Earl Grey tea, gaining him the childhood nickname of “Earl the Pearl” or “The Pearly Earl.” He spent holidays cooking prime rib with his sister, arguing with her over the amount of heat in the horseradish sauce. Rob and his dad spent many hours dueling over the grill, establishing manhood in the name of grill master. By the way… “Do you squish the burgers or let them be?” A question that was never answered.

He was preceded in death by his maternal grandparents, Leonard and Lucille Benson; and paternal grandfather, Robert Paul Bemiss.

The family will receive friends from 1 p.m. until service time at the chapel.

Burial will be at Memorial Park Cemetery, Sedalia, Mo with an escort by fellow motorcycle riders.

Memorial contributions may be made to DeFeet.org suicide prevention organization in care of Rea Funeral Chapel.