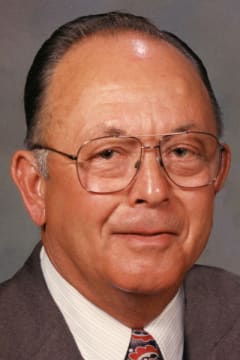 Robert Eugene Pummill, 93, of Sedalia, MO passed away Sunday, August 16, 2020 at EW Thompson Health and Rehabilitation Center in Sedalia. He was born on January 17, 1927 in Sedalia, the son of Albert F. and Lucille O. (Houk) Pummill, who preceded him in death.

Bob worked for the Sedalia Police Department where he was Sedalia's first Motorcycle Police Officer. He later worked for the Missouri Pacific Railroad and D&D Beverage, retiring from there after 27 years.

Memorial contributions may be made to the Sedalia Police Benevolent Department.

BOBBY sorry for the loss of your father--have not been in contact with since gosh high school years again my condolences Larry R Stiffarm --Grain-Valley
- Larry R Stiffarm
I will always remember coming up every summer for the State Fair....gosh, we had some good times together. I think we were piled up all over your house. We will all miss your Dad. He was such a kind soul and always asked about all of us when he would call.
- Carol Ables
Linda, Robin and Bobby, I am so sorry for your loss. I have so many wonderful memories of Bob and Ruth Ann. He was a wonderful man and will be missed by so many. Prayers for all of you during this time of grief!
- Teresa Klein
Great memories of your Daddy!! He was my favorite Uncle!! Always had a smile on his face!! I will keep him in my heart now With Love from Stuttgart AR!!
- Tami Hartley
Robin and Jody, I am so sorry for your loss. Jody, I remember you talking about your grandfather and how much he meant to you. My heart is with you and I send peace.
- Marjorie Griffin
Bobby, Brenda and family. Hugs and prayers to all. So sorry for your loss.
- Nancy Graham
sorry for your loss. Prayers for strength
- Barry Walter
Linda, Robin, and Bobby, I am so sorry to hear of Uncle Bob's passing. My fondest childhood memories involved your family and the fun we shared when visiting. Love you all and know Uncle Bob will always hold a special place in my heart.
- Glenda Miller
I remember as a little girl spending time at Bob's house lot of happy memories. Linda Robin and Bobby I am so sorry for your loss. Bob was a sweet man that I am proud to call my cousin. He will be loved and missed. But not forgotten.
- Robin Countryman
Bobby, to you and all your family. Prayers to you all.
- Paul Withers