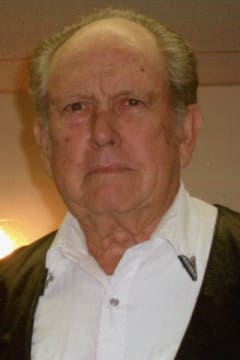 Obituary for Robert A. Hayes

Robert A. Hayes, 84, of Green Ridge, MO passed away Sunday, August 23, 2020 at Sylvia G. Thompson Residence Center in Sedalia, MO. He was born on January 18, 1936 in Sedalia, the son of Charles Ross and Bertha (Moore) Hayes, who preceded him in death.

On October 16, 1954 in Olathe, KS he was united in marriage to Elizabeth R. Baslee, who survives of the home.

Bob worked for the Kansas City Terminal Railway for many years. Starting as an apprentice and retiring as a carman. He enjoyed jukeboxes and playing the guitar. Bob played lead guitar and sang in a band for decades, the Country Ordaras. Bob was quite a carpenter, adding an additional home for Betty Rose to sell antiques and teach art classes, a garage, and a large house addition to their homestead in Green Ridge. He also designed and built a rock waterfall and koi pond on their property. Bob restored a 1947 Ford convertible and everything he touched to its original glory.

In addition to his wife of sixty-five years, survivors include his daughter, Cindy Kay Wilcher and her husband Norman of Warrensburg, MO and son, Rick Hayes and Barbara King of Green Ridge, MO; six grandchildren, Lisa (Scott), Steve, Becky (Jimmy), Robert (Jessica), Heather (Patrick), and Minde; 11 great-grandchildren and many nieces and nephews.

Besides his parents, he was preceded in death by five siblings, Hazel, C.R., Howard, Neil, and Gene Hayes.

Memorial contributions may be made to the Windsor Assembly Of God Church in care of Rea Funeral Chapel.

May your memories help ease the pain of Bob's passing. Thinking of you, Betty Rose, and the rest of the family. God will help you find peace.
- Charlotte Curry
I was saddened to read about Bob. I have many fond memories of time in the antique mall and tea room. He was such a kind and caring man. Sending prayers of peace to Betty Rose and the family.
- Charlotte Curry
I am sorry to hear of your loss. Bob was a wonderful man. I enjoyed listening to the band as well as the jukeboxes when I went to the house. God has received another amazing person
- Chris Randolph
Bob was a true joy to know he was a kind soul and he will be missed. Prayers for Betty and the family
- Carolyn and Lyle