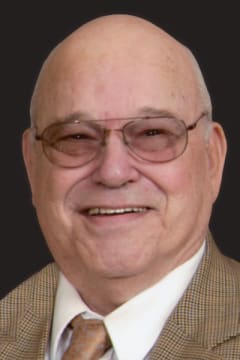 Richard was a member of Calvary Baptist Church where he served as a Deacon. He was a devoted husband and father. He worked as a feed mill operator for Cargill Nutrena Feeds in Smithton for over forty years, retiring in 2008. Richard served as a volunteer fire fighter for the Smithton Fire Department for many years. He enjoyed wood working, welding, hunting, fishing, and going on scenic drives across the country with his wife. Richard especially loved spending time with his grandchildren and great grandchildren.

In addition to his parents, he was preceded in death by an infant son, Allen LeRoy Griffith; two sisters, Joyce Allcorn and Carol Gerardy.

Burial will be at Smithton Cemetery, Smithton, MO.

Memorial contributions may be made to Calvary Baptist Church in care of Rea Funeral Chapel.

Lots of memories flooding back, my sister and I and our parents (Marvin and Ila Mae Nichols) lived in Smithton in the early 50's and were friends with Rick and his parents. I joined the church (Smithton Baptist) under Dr. Allcorn and Rick and I were in Sunday school together. My heart goes out to Ricks wife and to their children in this difficult time.
- Linda Parker
Deepest Sympathy to family.....was friends with him and went to school with.....
- Paul Adams
Many memories of Smithton School years Rest in Peace
- Ronnie Lee
So many found memories of Richard that go back some 45 yrs. He worked with my dad at Cargill in Smithton for like a 100 yrs.... Richard and hes family have truly left a positive mark on everyone they have touched. RIP Richard, tell my mom and dad a big hey... from all of us.. god bless you all.
- Ben Banner
Ron and family, So sorry to hear about your dad. I know he will be missed. Prayers with your family.
- Doris Gemes