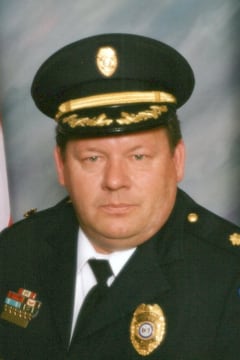 Rene E. Dedrick, 71 , of Sedalia, MO passed away on Tuesday, November 16, 2021, at Bothwell Regional Health Center, in Sedalia. He was born on February 7, 1950 in Sedalia, the son of Ralph and Cleo "Dean" (McNay) Dedrick, who preceded him in death.

On November 29, 1985 in Sedalia, he was united in marriage to Rebecca Ann Bennett, who survives in the home.

Throughout his childhood, Rene was a member of Epworth Methodist Church. In 1985, he became a long-time member of Trinity Lutheran Church. Then in 2002, he joined St. Vincent De Paul Sacred Heart Parish. He was a member of Sedalia Noonday Optimist Club, the Knights of Columbus Chapter 831, and was a lifetime member of the Fraternal Order of Police.

Rene went to work for Safeway at the age of fifteen, and continued working throughout high school and college. In 1970, he enlisted in the Missouri Army National Guard and continued that career until he retired as a Chief Warrant Officer II, with just short of 40 years of honorable service. In 1974, he joined the Sedalia Police Department and worked his way up to become Deputy Chief. He retired from the Sedalia Police Department in 2002 after 28 years and three stints as acting Chief of Police throughout his career. In August of 2002, Rene went to work for Tipton Correctional Center as a Cook. He enjoyed cooking until retiring in 2010.

Rene was an active supporter of outreach programs to include Cops in the Park, D.A.R.E., Police Cadets, Sheriff Explorers, and Citizen Policing. These are just a few things he did to help ensure his community was as safe as he could make it.

Rene cherished his time with family and friends; spending time at the lake with Bullet, his faithful dog; fishing and hunting; and the many years he spent playing Santa at City Hall, various schools and family gatherings.

In addition to his parents, Rene is preceded in death by two sisters-in-law Linda Johnson and Patricia Dedrick; and his in-laws Robert and Mary Sue Bennett

Funeral service will be held at 10:00 am, Friday, November 19, 2021, at Rea Funeral Chapel, Sedalia, with Chaplin Ron Hoehne, officiating.

Burial will be at Crown Hill Cemetery with full military honors performed by the Missouri Army National Guard.

Memorial contributions may be made to Wounded Warriors Project, in care of Rea Funeral Chapel, Sedalia.