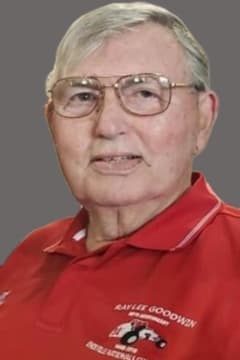 On December 2, 1961 in Warrensburg, MO, he was united in marriage to Alice Jean (Powell) Goodwin, who preceded him in death.

Ray Lee enjoyed a stellar 15-year career of racing sprint cars from 1960-1975. During that span he won over 150 A-Main events, including the 1968 Knoxville Nationals. At Knoxville Raceway he won 18 features. Ray Lee was a member of 5 racing Hall of Fame's, the most honorable, The National Sprint Car Hall of Fame. In 1972, he was the IMCA National Champion. Ray Lee also won track championships in four different states, Kansas, Iowa, Missouri, and Nebraska. He won the 1971 Missouri State Fair Futurity on the famous mile track, in Sedalia. He went on that year to be the Knoxville Raceway Track Champion. He was the Kansas City Auto Racing Club Champion for three consecutive years 1964-1966, at Olympic Stadium. He was forced to retire after two vicious crashes at Knoxville Raceway in 1974 and 1975.

In his later years, he enjoyed farming in Polo, MO with his wife, Alice and their son's Raymond (Alexis - granddaughter) and Steven (Sheila). He also enjoyed fishing and going to high school basketball games. He loved watching his grandchildren, Grace and Grant, play sports at Sacred Heart School.

In addition to his children and grandchildren, Ray Lee is survived by a brother, Richard Goodwin.

In addition to his wife and parents, Ray Lee was preceded in death by two brothers, Phillip Jr Goodwin and Jimmy Goodwin.

A Mass of Christian Burial will be held at 10:00 am, Thursday, September 16, 2021 at St. Vincent de Paul Sacred Heart Parish, with Father Joe Corel, officiating.

Visitation will be held one hour prior to service.

Burial will be at Memorial Park Cemetery. 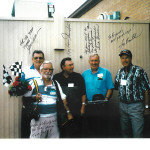