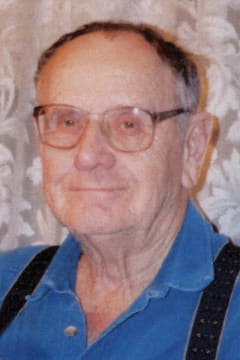 Bud served his country honorably in the United States Army during WWII from 1943 to 1946. He worked for Panhandle Eastern as a Chief Inspector until retiring at 78 years old in 2001. He was a member of the Sedalia VFW Post #2591 and American Legion Post #642. Bud enjoyed traveling all over the world. He liked hunting, fishing, antiquing, scrapping, and going to auctions. Bud especially loved being around his grandkids and playing cards.

In addition to his wife and parents, he was preceded in death by a brother, Harry Stout; four sisters, Gladys Stout, Ethel Bemer, Goldie Salmons, Sadie Katzinger; and a granddaughter, Muffy Colvin.

A Celebration of Life service will be held at 2:00 p.m. Friday, September 24, 2021, at Rea Funeral Chapel with Jack Jones officiating.

Burial will be at Memorial Park Cemetery, Sedalia, MO, with full military honors conducted by the United States Army and Sedalia VFW Post #2591.

Instead of flowers and plants, memorial contributions may be made to the Sedalia Animal Shelter in the care of Rea Funeral Chapel.