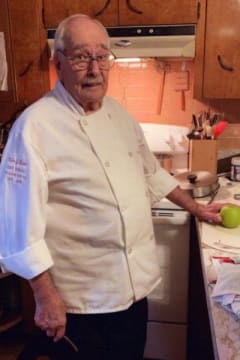 Ollen Joel Rush, 87, of Sedalia, MO passed away Saturday, August 22, 2020 at Harry S. Truman Memorial Veterans' Hospital in Columbia, MO. He was born on January 4, 1933 in Ottawa, OH the son of Earl and Lillian (Below) Rush, who preceded him in death.

Ollen was a Chef by trade. He cooked for the Bothwell Hotel in the early 1960's, Whiteman Air Force Base, a prison, and a Bible camp. He loved to tell stories about cooking for the prisoners and setting up for summer camps, especially the kids at Camp Half Moon in Great Barrington, MA.

Ollen enjoyed fly fishing and making his own flys and working with leather. He loved cooking and baking for family and friends, wine making and sharing his wine with family and friends. He had innumerable stories of his pets, racoons, squirrels, his moms bird, cats, dogs, and countless others. He was a Veteran of the Korean War and loved telling stories of his war days.

Besides his parents, he was preceded in death by a stillborn son, Robert Lee Rush; and two brothers, Clyde Rush and Rusty Rush.

There will be a private Memorial service held at a later date.

Tammy, prayers and deepest sympathies in the passing of your dad. May your memories bring you comfort.
- Trisch Domingue