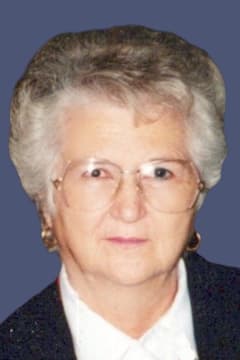 Norma Williams, 87, of Sedalia, MO passed away Wednesday, May 19, 2021, at Boone County Hospital in Columbia, MO. She was born on November 24, 1933, in Pettis County, MO a daughter of Israel Jackson (IJ) and Leota Mae Rhoads.

She was a high school graduate of Smithton High School in 1951. Norma was a member of the Olive Branch Baptist Church. On December 12, 1953, in rural Pettis County, she was united in marriage to Eldon Williams (who passed away on May 4, 2011).

Norma first worked at Sheen Truck Line in Sedalia and was one of the first operators of the IBM Computers in Sedalia. She later worked at Interstate Studios, followed by spending the majority of her career in Lamy’s Manufacturing in which she had over a 20 year career as a floor supervisor. She enjoyed her retirement spending time with her granddaughters, Hannah and Morgan, sewing, and shopping.

In addition to her husband and parents, she was preceded in death by her son, Rick Williams and daughter-in-law, Sue Williams of Malta Bend, MO.

A Celebration of Life gathering of family and friends will be held from 11:00 a.m. until 12:30 p.m. on Tuesday, May 25, 2021, at Rea Funeral Chapel. Burial will be immediately following visitation at Olive Branch Cemetery with Pastor Vi Rhoads officiating.

Memorial contributions may be made to the Show-Me-Christian Youth Home in the care of Rea Funeral Chapel.

Ms. Norma was the sweetest person I have ever met! Her smile was beautiful! Just loved her! 😊
- Juanita Gravitt