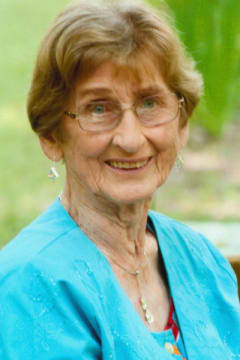 Maxene LaRee Thurman, 95, of Warrensburg, MO formerly of Hutchinson KS, passed away October 3, 2020 at the Warrensburg Manor Care Center. She was born on January 25, 1925 in Ottawa County, KS the daughter of Leo Allison and Jessie (Klein) Allison, who preceded her in death.

Maxene moved to Hutchinson immediately after graduating from the Delphos High School in 1942. She lived in Hutchinson until October 2014, when she moved to Sedalia, MO, to be closer to her son. She enjoyed playing duplicate bridge at the Master's level. She loved to travel and had visited all 50 states, southern Canada, northern Mexico, western Europe, and Australia.

She is survived by a son, Gerald J. Scott of Sedalia; two grandchildren, Aaron Scott of Senatobia, MS and Susan Scott of Columbia, MO; and a sister, Shirley Jacques of Salina, KS.

There will be no formal service held.

There will be a private burial held at Delphos City Cemetery, Delphos, KS at a later date.

Memorial contributions may be made to the First Presbyterian Church, 201 E Sherman St, Hutchinson, KS 67501.

Cremation arrangements are under the direction of Rea Funeral Chapel, Sedalia, MO.

Honor the life of Maxene Thurman

Please share a condolence, photo or memory of Maxene. We welcome all condolences that are positive and uplifting that will help family and friends heal.