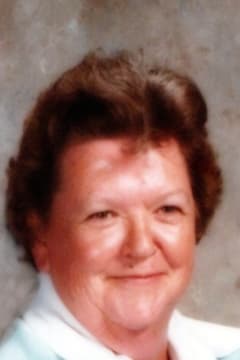 While in school, she met the love of her life, whom she married just a few months after graduation. On December 20th of 1952, she married the late Kenneth L. Sims. Kenneth and Loula Rae bought a home on Locust street, and were well known by many in the community. They were two of the kindest and funnest people to be around. Whenever they could, they drove to Warrensburg, MO VFW hall to square dance the nights away. Lou also cooked at least one meal for everyone in Sweet Springs, as she spent over 30 years as a cook, the majority of these years was at  the “V” Restaurant. She was especially known for her pies.
In April of 1958, they welcomed their one, and only, child, Kenneth “Kenny” Ray Sims. Kenny Ray went on to marry his high school sweetheart, Donna Arndt, in 1977, and the young couple welcomed a baby girl, Kimberly, in October 1979.

The celebration of new life was soon shattered by the shock of tragedy, when Kenny Ray was hit and killed by a drunk driver, before his daughter turned a month old. Despite burying their only child at such a young age, the couple leaned on one another, and found a way to see the world the way they always had. Finding the strength to smile and eventually, laugh, again.

Kenny’s wife remarried in 1982, to Wayne Raines, of Nelson. Wayne & Donna Raines moved to Otterville, MO, where they welcomed two more children. Loula Rae treated them all as family, just the same. And with that, she was blessed with bonus grandchildren, great-grandchildren and as she would tell anyone who would listen, her bonus son-in-law, Wayne.

Besides her husband and son, Loula Rae was preceded in death by a great-granddaughter, Aracely González; a brother, William “Bill” Sparks; and two sisters, Irene Lindsey and Anna Marie Brown.

A graveside service and burial will be held at 11 a.m. Friday, April 30, 2021, at Sunset Gardens Cemetery, Marshall, MO with Pastor Logan Patrick officiating.

The family would like to especially thank and acknowledge the hardworking and kind staff of The Essex in Sedalia, Fairview Nursing Home and Crossroads Hospice.

Arrangements are in the care of Rea Funeral Chapel, Sedalia, MO.