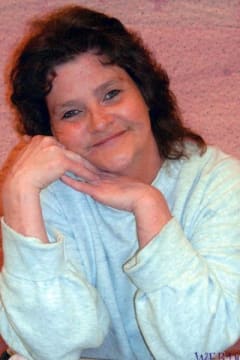 Lola A. Schumaker, 61, of Sedalia, MO passed away Wednesday, September 30, 2020 at Bothwell Regional Health Center. She was born on October 13, 1958 in Carrizo Springs, TX the daughter of Robert Burkhead who preceded her in death and Anna Burkhead Benitz, who resides in Sedalia.

On September 9, 1977 in Sedalia, she was united in marriage to Melvin Leroy Schumaker, who preceded her in death on July 11, 1986.

Lola enjoyed collecting angel figurines, and earlier in life going to the lake camping. She liked to sing, listen to music, and watch old western shows. Lola especially loved and enjoyed being around her grandchildren.

In addition to her husband and father she was preceded in death by a sister, Sherry Schwermer; and maternal grandparents, Ollie and Estella Dhority.

Honorary bearer will be Buck Venable.

Memorial contributions may be made to the Sedalia Boys and Girls Club in care of the funeral chapel.

Ang, thinking of all y'all and praying for comfort. Love y'all
- Cindy Venable
Angie, we were so sorry to hear of the loss of your sister. May God bless your family with peace and comfort during this difficult time. Thoughts and prayers are with you.
- Rebecca Dedrick