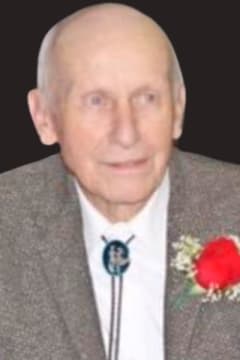 Lawrence Lee "Dinky" Ulmer, 96, of Warrensburg, MO formerly of Sedalia, passed away Monday, October 5, 2020 at Warrensburg Manor Care Center. He was born on January 15, 1924 in Hopkins, MO the son of Pearl Lawrence and Elsie Lee (Davis) Ulmer, who preceded him in death.

Dinky grew up training horses and working on the E.W. Thompson Farm before entering the military. He served his country honorably in the United States Navy during WWII stationed at Moffett Field Airbase in Mountain View, CA where he was an Aviation Electronic Technician Mate 3rd Class. He was a life time member of Sedalia VFW Post #2591 and American Legion Post #642. He was a member of Parkview Christian Church.

After his military service he was a self employed livestock hauler for the Sedalia and surrounding areas and delivering all over Missouri. He also worked at the Sedalia livestock auction for many years. Dinky enjoyed his bluetick coonhounds, coon hunting, field trials and water races. He was a member of the Sedalia Coonhound Club. He also enjoyed going on trail rides, pulling pony competitions, and especially loved going dancing with his wife Alice, the love of his life.

Dinky will always be remembered for his story telling, practical jokes, his infectious laughter, but most of all, love for his family and life.

In addition to his wife and parents, he was preceded in death by a two brothers, Lester Clay Ulmer and Stanley Ulmer; two sisters, Leona Rose and Juanita Pate.

A private family memorial service will be held at a later date.

Memorial contributions may be made to Hound Lover Rescue in care of Rea Funeral Chapel.

Dinky "Dink" was the preferred hauler of many cattle for the George Anderson & Sawford families through the years.
- Joyce Sawford