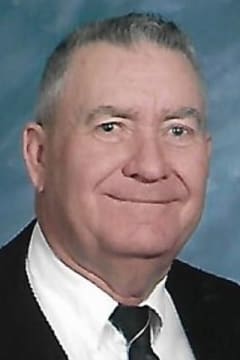 He loved the Lord and shared his faith with anyone he came in contact with. After serving his country, he married his sweetheart and supported his family by trucking grain, hauling hay, and farming. He and his brother, Paul, cared for the Adams-Sowers Cemetery in Cooper County, MO. He held several positions at his church. Most recently being a "greeter" at First Baptist in Sedalia, MO. Even in retirement, he enjoyed helping his sons-in-law and grandchildren with their farming operations. He never worked a day in his life because he loved what he did. His motto - If you work hard at it, it will be easy. But if you work easy at it, it will be hard.

Just Think... you are here, not by chance but by God's Choosing. His Hand Formed You and made you the person you are. He compares you to no one else. You Are One of a Kind. You lack nothing that His Grace can't give you. He has allowed you to be here, at this time in history to fulfill His special purpose for this generation. ...the Lord's unfailing love surrounds the man who trusts in Him. Psalms 32:10

In addition to his parents, he was preceded in death by three brothers, June Mitchell Adams, Richard Adams, and George Allen Adams.

It was Lawrence's wish to be cremated with no formal services.

Memorial contributions may be made to First Baptist Church, Sedalia, MO, or to the Show-Me Christian Youth Home in La Monte, MO in care of Rea Funeral Chapel.

Lawrence was one one of the nicest, and most caring individuals. He would help anyone in need. He truly walked with our Lord and Saviour. My prayers to Helen, and all of the family and friends. My Mother has been gone for many years, but she adored Lawrence as well...she would have written a beautiful condolence in his memory. God's Blessings Shirley Adams
- Shirley Adams
good man,so sorry for your loss
- Ken Clemons
I am so sorry to hear of Mr Adam's passing. The Adam's family was always very kind to me when I would spend time with Tammy on our sleepovers growing up. My prayers for strength and peace during this time.
- Connie Dove
Lawrence was nice man. He always went out of his way to greet me and say hello. He made the church a welcome place. People are better for knowing him because he knew the Lord.
- Steve Craighead