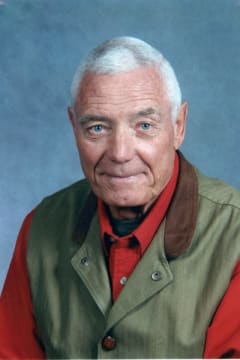 Joseph Franklin Stine, 87, of Sedalia passed away Tuesday, July 28, 2020, at Bothwell Regional Health Center in Sedalia. He was born on February 6, 1933, in Neosho Rapids, KS, the son of Perle W. Stine and Hazel M. (Petty) Stine, who preceded him in death.

After graduating from Emporia State University, he entered the Marine Corps officers program. He rose to the rank of Major in the United States Marine Corps, where he retired after 20 years as a 100% disabled veteran.

Joe was a member of Neosho Rapids Methodist Church, being baptized there as a child. He had many hobbies. Joe was an avid hunter, vegetable gardener, golfer, and enjoyed reading. Joe lettered four years in basketball for Emporia State and remained a basketball fan his entire life. He especially enjoyed his visits with his life long friend LeRoy Millerd (Fatball) that lives in Independence, MO. Joe had a great love for his dogs, Josie and Taffy. In memory of Joe, he would want memorial contributions sent to the Sedalia Animal Shelter.

In addition to his wife Teresa Stine, surviving are a daughter, Susan Turner Sherlock (Mike) of Rhode Island and their six children, a stepson, Brett Allen (Kailey), and their daughter of Sedalia; and his sister-in-law, Margie Stine, wife of Jay Stine.

In addition to his parents, he was preceded in death by a son Steve Turner; three brothers; three sisters; and his previous wives, Ruby Jean Stine and Betty Fletcher Stine.

Joe's wishes were cremation and a celebration of life gathering of family and friends to be announced at a later date.

Arrangements are in the care of Rea Funeral Chapel.

Please share a condolence, photo or memory of Joseph. We welcome all condolences that are positive and uplifting that will help family and friends heal.