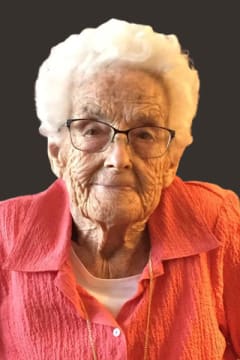 Jesse Naydne Young, 97, of Sedalia, MO passed away Monday, November 23, 2020 at Sylvia G. Thompson Residence Center. She was born on December 6, 1922 in Cross Timbers, MO the daughter of Ollie Burton and Euba (Dalton) Burton, who preceded her in death.

Naydne enjoyed traveling with her husband Bill. She enjoyed being outdoors in her flower gardens and going on trail rides in Texas. But her true love was fishing. Naydne especially loved spending time with her family and grandchildren.

In addition to her parents and husbands, she was preceded in death by a son, William Dale Franken; two brothers, Garland and Harlan Burton; two sisters, Ima Faye Brandes and Mildred Brown

A graveside service and burial will be held at 1:30 p.m. Tuesday, December 1, 2020 at Crown Hill Cemetery with Rev. Jeff Randleman officiating.

There will be a time of visiting from 1:00 p.m until service time at the cemetery.

Linda and Carolin. I'm so sorry for your loss. May God be with you in your time of sorrow.
- Renee Heineman
Hayden was a wonderful person she was a hard worker loved her flowers and fishing my thoughts and prayers go out to the family
- Glenn Moore
I enjoyed spending time with you this past year..You were very sweet to me Cheryl Cooper
- Cheryl Cooper
She was a firecracker till the end sorry for her loss watch out heaven here she comes
- Sheila carwile