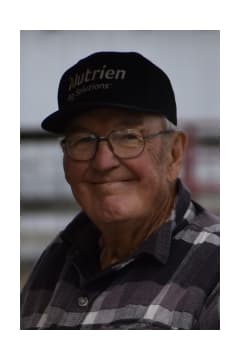 James Douglas (J.D.) Gregory, 86, of Houstonia, MO passed away Wednesday, August 7, 2019 at the Missouri Veterans Home in Warrensburg, MO. He was born on July 4, 1933 in Sedalia, MO the son of Earl Henry and Mary Elizabeth (Walkup) Gregory, who preceded him in death.

JD graduated from Houstonia High School in 1953 and served honorably in the US Army during the Korean Conflict from 1953-1955. He was raised on the family farm in Houstonia, where he lived his entire life. He was a farmer and cattleman who loved his Polled Hereford cattle. He also raised donkeys for breaking cattle and enjoyed going on tractor cruises on his Super M tractor that he and his son Kevin and brother Robert restored.

He enjoyed farm life and all that went with it. He worked alongside his son Kevin until recently. The family would often help him with bailing hay and working calves. Recently, JD attended the Pettis County 4-H livestock show, proudly watching ringside, as his great-granddaughter showed the family cattle. He was active in many groups, including, being a lifelong member of Houstonia Methodist Church, the American Hereford Association, the Pettis County Cattleman's Association, the Central Missouri Polled Hereford Association, State Fair Saddle Club, and the State Fair Foundation. He served as the Assistant Superintendent for the Missouri State Fair Mule Show and measured ponies at the State Fair 4-H and FFA horse shows for years.

Burial will be at Houstonia Cemetery, Houstonia, MO with full military honors provided by the US Army and VFW Post 2491.

Honorary bearers will be the grandchildren.

Memorial contributions may be made to the Missouri State Fair Foundation - Hereford Barn Improvements, in care of Rea Funeral Chapel.

JD was always so friendly , and never met a stranger. He would give you the shirt off his back if u needed it. We will all miss his nice big smile he always had for everyone he met. Our prayers for the family. I know J>D> is wearing his crown for sure.
- sharon Kearney
Too many memories to share. I remember lots of good times and some funny ones to. Thinking of all of you during this time. We have another angel sorting stock and measuring ponies. Melissa Boatright Vesser
- Melissa Vesser
Enjoyed many meals at JD's dinner table. He was a fine man. Condolences to the family.
- Ron McBee