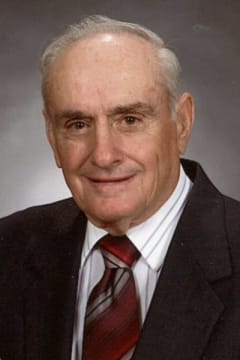 George Albert Harvey, 83 of Hughesville, MO joined his eternal family on Sunday, October 18, 2020. He was born on May 10, 1937 in rural Longwood, MO a son of Thomas Urban and Ruby Mae (Landes) Harvey.

As a child he enjoyed hunting, fishing, roaming the timber, and bike riding with family and friends. He was a member of the Longwood 4-H Club, where he received the Gold Clover Award. George attended grade school at Cartwright School, and graduated from Hughesville High School in 1955.

On August 19, 1955 in Sedalia, MO he was united in marriage to JoAnn Nicholson who survives of the home. The couple recently celebrated their 65th wedding anniversary.

He and JoAnn were members of the Wesley United Methodist Church in Sedalia, MO.

Farming was his life, he loved working the land with his father and raising livestock. His first job was riding a horse and hauling water for the threshing crews. At the age of six he graduated to a tractor that had blocks added to the pedals so he could reach them. His grandsons worked many years helping him on the farm, until medical issues forced his retirement at age 80.

He worked part-time for the ASCS of Pettis County, spot checking and measuring farm crop land. He also served on the ASCS County Committee as both a member and as the chairman.

George was a member of Farm Bureau, the Cattleman’s Association, the University of Missouri Extension Council of Pettis County, the MFA Farmers Assembly, and the Neighborhood Watch. He received a certificate from the President of the University of Missouri for his leadership and service, an award from the state department of agriculture in recognition of 15 years of ASCS service, and was elected as a delegate to represent the local MFA at the state level.

When farm work would slow down, he was always ready for camping with friends and family at Missouri lakes. Nothing gave him more pleasure than teaching others to water ski. He loved swimming, boating, and fishing (especially for spoonbill). He also enjoyed traveling and visiting oceans.

George was a man who worked hard, cared deeply and gave his best for the people in his life, for as long as he possibly could.

George was preceded in death by a son, George A. Harvey, Jr; and two sisters, Annie Raines and Barbara Harper.

Arrangements are under the direction of the Rea Funeral Chapel. It was George's request that there be no public service held.

Linda and JoAnn sorry to hear of George passing. Was out of state. Condolences. He was a good man
- Debbi karrick
Sincere and heartfelt condolences to George's family. I'll remember him as such a pleasant and gentle man. He was always so kind to my family.
- Ginni Griffen
George was a good friend and a good man. Many pleasant memories. Sorry for your loss.
- al mettenburg