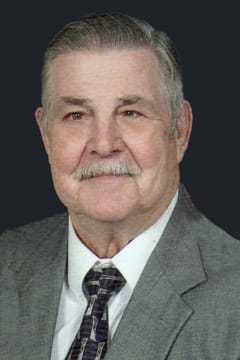 Francis Benjamin Koetting passed away on Wednesday, July 21, 2021, at Sylvia G. Thompson Residence Center, in Sedalia, MO, at the age of 90.  He was born on August 24, 1930, near Taos in Cole County, MO, the son of Conrad and Julia (Pepple Watts) Koetting.

He graduated from St Francis HS in Taos in 1948.  He served in the US Air Force from 1948 to 1952, in Texas, California, Colorado, Arizona and a few months in Japan during the Korean Conflict.  Francis married Alverda Ann Boss in Chamois, MO, on January 12, 1952.  He started his career with Household Finance Company in Jefferson City and worked for HFC for 17 years, with stops in St Louis, Topeka and Sedalia.  Francis then worked for Missouri State Bank (Sedalia), North Plaza State Bank (Topeka, KS) and retired from Union Savings Bank in Sedalia.  He was a long time member of St Patrick Catholic Church in Sedalia.  Most of his free time in his youth was spent playing baseball, in which he was a successful pitcher and was scouted by several professional teams.  He coached most of his son's youth baseball teams and was known for the various funny phrases he used after a player made a mistake.  He also took great pride in his gardens and salsa.  As they became empty-nesters, he and Ann traveled quite a bit, including to Europe and Brazil to see Leda, a foreign exchange student who lived with them in the 70's.

Francis was preceded in death by both parents and siblings Mary, Lorine (Joannes) & Quintin (Buddy) and infant son Quintin.

Due to Air Conditioning issues a visitation will now be held at 10:15 a.m. Monday, July 26, 2021, at St. Vincent de Paul Parish, Sacred Heart Church, Sedalia. Face masks and social distancing are requested by the family.

Burial will be at Crown Hill Cemetery, Sedalia MO. Full military honors will be conducted by Whiteman Air Force Base Honor Team and Sedalia VFW Post #2591.

Honorary bearers will be his grandchildren.

Memorial contributions may be made to Open Door Ministries or Meals On Wheels in care of Rea Funeral Chapel, Sedalia.