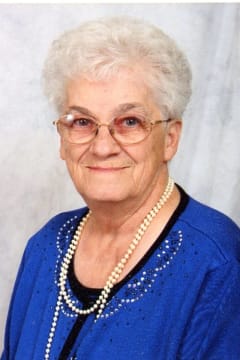 Dorothy Dell Reed, 83, of Sedalia, MO passed away Thursday, March 18, 2021, at Sylvia G. Thompson Residence Center in Sedalia. She was born on September 10, 1937, in St. Louis, MO, the daughter of Darrell Lester Harmon and Dollie Alice Mae (Turnbough) Harmon, who preceded her in death.

Dorothy was a member of Abundant Life Church in Cole Camp, MO. She worked as a receptionist for Superior Tax Service and co-owned Wards Tax Service for a combined forty years. Dorothy enjoyed sewing and bowling. She especially loved going to church and getting together with family. Dorothy was known for her generosity to others and kind spirit.

In addition to her husband and parents she was preceded in death by a sister, Darlene Kreamalmeyer; a sister-in-law, Linda Harmon; two great granddaughters.

The family will receive friends from 3:00 p.m. until service time at the chapel.

Honorary pallbearers will be her grandchildren.

Memorial contributions may be made to the Wounded Warrior Project in care of Rea Funeral Chapel.

So sorry to hear of Dorothy's passing. She was a beautiful person inside and out. Prayers and comfort to the entire family, I know she will be missed.
- Carol Gregg
So very sorry to hear of this loss -I feel blessed to have known Dorothy--- God Speed , Rest in peace.
- Sharon Handley