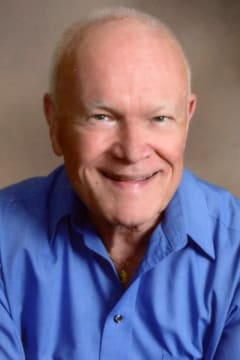 Donald Charles Hofheins, 84, of Sedalia, MO went peacefully to be with his Lord and Savior, Jesus, on Sunday, September 26, 2021, from his home in Sedalia where his family was at his side.

He was born on December 31, 1936 in Kansas City, MO the son of Charles Joseph Hofheins and Lorene Verna (Baker) Hofheins, who preceded him in death.

On December 22, 1957 in Springfield, MO he was united in marriage to Kitty Carolyn Miller, who resides in the home.

Don moved to Sedalia with his parents in 1948 and graduated from Smith Cotton High School in 1954. He graduated from Drury University in Springfield in 1958 with a Bachelor's degree in Music. Don and Kitty lived in Lewellen, NE for a year where he taught choral and orchestral school music. They returned to Sedalia in 1959 where their son, Donnie was born. The family then moved to Chillicothe, MO where he owned and operated Chillicothe Business Equipment Company for 24 years. He was bi-vocational Minister of Music at the First Baptist Church of Chillicothe for 20 years where he was ordained as a Deacon. In 1984 Don and Kitty moved back to Sedalia where he owned and operated Sedalia Typewriter and Computer Company until retirement. He was Interim Choir Director at the First Baptist Church of Sedalia for five years and a deacon there for many years. Don loved the Lord, Jesus Christ, and he loved serving people in many ways with many kindnesses. While in Chillicothe he served as President of the Kiwanis Club, and in Sedalia as President of the Rotary Club.

Don enjoyed hunting and fishing, especially on vacations with his son and grandchildren. He was an Eagle Scout, a private airplane pilot and an avid motorcyclist and loved his hunting dogs. Don loved to sing and play the saxophone. He participated in barber shop singing and community theater. His first paying job was at 8 years of age as a choirboy at Grace and Holy Trinity Cathedral in Kansas City. As a teenager and young adult he was on call as a stand-in and session sax player working with many world class artists. He played in the Sedalia Symphony and Park Band when in High School and was currently a board member and sax player for the Park Band. He continued to play professionally as a member of several bands including lately in 2 big band jazz groups in Kansas City. Don loved singing in the choir and playing the saxophone in the music ministry of the First Baptist Church locally. He played his horn touring Israel with the Camp Kirkland Mission organization and with a First Baptist Church of Sedalia team mission in Ukraine. He led vocal music for Bold Mission Taiwan-Missouri Southern Baptists in 1983.

Don’s great joy was to be with his family on every occasion possible. Even when he was very ill, cell phone texts and pictures of his grandchildren and great grandchildren made him smile.

A Celebration of Life service will be held at 11:00 a.m. Saturday, October 9, 2021 at First Baptist Church, Sedalia, with Pastor Jeremiah Greever officiating.

Honorary bearers will be Deacons and Woman's Bible Study of the First Baptist Church of Sedalia, Dean Homan, and Tom White.

Memorial contributions may be made to Christian Prison Ministry of Mid-America (cpmm-a.org) or First Baptist Church, Sedalia.