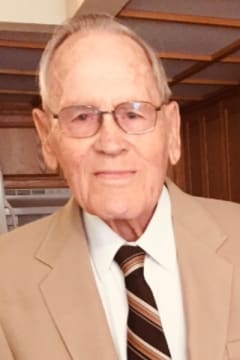 Dale was born in Green Ridge, MO, on April 16, 1926, to Fredrich William and Mary Winifred (Brown) Miley. He had a sweet younger sister, Lorene Keithly, who preceded him in death.

He was united in marriage to Betty Ann Young on April 16, 1950, and she preceded him in death on May 9, 2016. They enjoyed 66 years together with Dale, always referring to her as his “Bride.”

Dale was a Christian, and he was baptized at an early age. He and Betty Ann attended and served the First Baptist Church, Sedalia, for many years.

As a young man, Dale served with the U.S. Army, 9th Division, as a medium tank driver in WWII. Later he continued to serve his country for 35 years with the 205th Military Police Battalion of the Missouri National Guard, ending his military service as a Command Sergeant Major.

Dale retired from the U.S.A.F. Civil Service at Whiteman Air Force Base, as Foreman, supervising civilians and Air Force personnel in the Refrigeration and Air Conditioning Unit.

His retirement years were planned well in advance and were spent traveling with Betty Ann for over 25 years, touring in every state!

There will be a small private graveside service, with full Army military honors, for his immediate family only. Extended family and friends are welcomed to a viewing from 8:00 a.m. – 5:00 p.m. Friday, August 28, 2020 at Rea Funeral Chapel, Sedalia.

In lieu of flowers, memorial contributions are suggested to Wounded Warriors Project, c/o Rea Funeral Chapel, Sedalia, and are much appreciated.

Honor the life of Dale Miley

Please share a condolence, photo or memory of Dale. We welcome all condolences that are positive and uplifting that will help family and friends heal.