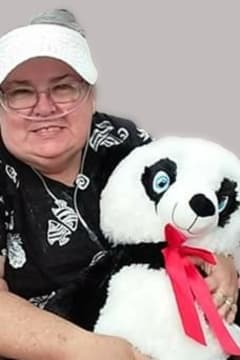 Cynthia "Cindy" W. Campbell, 67, of Sedalia, MO passed away September 28, 2021 at Bothwell Regional Health Center in Sedalia. She was born on April 9, 1954 in Jefferson Courthouse, OH the daughter of Leonard Williams Jr. and Doris (Rousch) Williams, who preceded her in death.

On December 30, 1989 in Ely, NV she was united in marriage to George D. Campbell Sr., who resides in the home.

Cindy was a 1972 graduate of Perry High School in Perry, GA. After graduating she move to Utah and started getting involved in Mountain Men rendezvous. Later in her life started to learn sewing and in 1997 started working for Liz and Jane Clothing in Panama City Beach, FL until starting her own seamstress business in 2000. Cindy enjoyed collecting sewing equipment. She especially loved spending time with her children, grandchildren and family. But most of all, Cindy was the "Love of George's Life".

In addition to her husband she is survived by three sons, Chris C. Allen of Tooele, UT, Clinton R. Allen of Sedalia, and George Campbell, Jr. of the home; a daughter, Sherry L. Metcalf, of Orem, UT; two step-daughters, Freedom Hope Johnson, of Globe, AZ and Kattie Campbell of Riverton, UT; a step-son, Christopher George Campbell of Riverton, UT; thirteen grandchildren, and one great-granddaughter; a brother, Barrie Williams of Pensacola, FL; and a sister, Virginia Keim of Lynn Haven, FL.

In addition to her parents she was preceded in death by two brothers; and a sister-in-law.

A memorial graveside service and burial will be held at Memorial Estates Cemetery in Salt Lake City, UT at a later date.