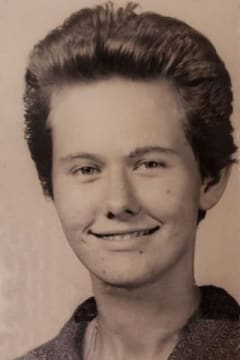 Carol Anne Rhoads, 76, of Cole Camp, MO passed away Friday, January 22, 2021 at her son's home in Columbia, MO. She was born on March 17, 1944 in Fullerton, CA the daughter of Everett Spencer and Marguerite Dyke, who preceded her in death.

Carol was a dedicated member of the Show Me Sound Chorus of Sweet Adelines. She enjoyed writing, painting, reading, playing card games, and loved her dog Biscuit. Carol worked as a Librarian at Boonslick Regional Library in Sedalia and at the Tipton Correctional Center. She was a loving and faithful wife and mother to her family.

In addition to her husband and parents she was preceded in death by a son, Bobby Eugene Rhoads; and two brothers, Michael Spencer and J.D. Bruins.

A memorial service will be held at 7:00 p.m. Friday, January 29, 2021 at Rea Funeral Chapel with Pastor Duke Jones officiating.

There will be a burial of the urn held at a later date in Mt. Herman Cemetery.

Memorial contributions may be made to the American Childhood Cancer Organization in care of Rea Funeral Chapel.

Carol was a great friend who gave me encouragement when needed and provided many hours of card playing and fun. She has been one of the most delightful people I have ever known. She was honest to a fault even though she claimed to cheat at cards. She will be greatly missed. But many great memories live on...
- Idella Arthur
So sorry to learn of Carols passing had worked with her a few times at school events. She was really special! Prayers for the family.
- DeLores Janis
I sang for many years with Carol in Show Me Sound Chorus. I absolutely loved hearing her beautiful bass voice and enjoyed her sense of humor. She was truly a wonderful friend who will be greatly missed. Sending prayers of comfort for Carol's family and friends. Karen Vollmer
- Karen Vollmer
Many sympathies for the family. I have such found memories of Aunt Carol's larger than life laugh, playing cards. Love, peace & solace; may beautiful memories carry you over these months.
- Lisa
Truly sorry to hear of this. Although I had not seen your mom in many years I will always remember her kindness towards me. Thinking of you and your families.
- Nicole Bohm