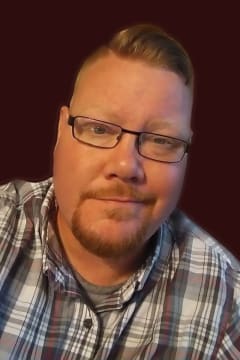 Brian Wade Pettis, 38, of Sedalia, MO, passed away much too soon on Thursdaym, September 23, 2021, at Bothwell Regional Health Center in Sedalia. He was born June 20, 1983, in Sedalia, the son of Richard W. Pettis, who preceded him in death, and Mary (Netta) A. (Mefford) Pettis, who resides in Sedalia.

On April 20, 2013, in Longwood, MO, he was united in marriage to Amanda Bishop, who resides in the home.

Brian did everything with his whole being. He was a devoted son, brother, husband and father who kept family above everything else. He was a jack of many trades, working a variety of jobs as he pursued the elusive perfect work arrangement. He was a master of the grill and the smoker, seizing every opportunity to barbecue for family and friends.

He was an avid fan of the Kansas City Chiefs and Royals, but his favorite pastime was professional wrestling. On the “Shawn or Bret” question, he was Bret all the way. He road tripped to Atlanta for Wrestlemania and to Chicago twice for AEW pay-per-view shows. He also was on the commentary team for New Breed Wrestling’s internet broadcasts.

Brian was the funniest guy in any room (just ask his mom), performing stand-up from time to time for crowds and impromptu one-liner shows constantly for individuals.

He is survived by his wife; daughters, Ella Brown and Piper Gerlach; sons, Brody Gerlach and Ollie Pettis; his mother; sister, Heather Wilson, her husband Josh and their children, Liam and Lyla; brother, Michael Pettis and his children, Ryder and Scarlett; and numerous aunts, uncles and cousins.

He was preceded in death by his father; maternal grandparents, Sidney and Louise Mefford; paternal grandparents, Tom and Gail Pettis and Ray and Priscilla Talbott; uncles, Steve Pettis and Thomas Dean Pettis; and lifelong partner in comedy, Zach Ryan. Brian’s passing was due to organ failure; some of his organs, bone marrow and tissue have been donated for those in need.

A Celebration of Life will be held from 6 to 8 pm Friday, October 1, 2021 at Rea Funeral Chapel, Sedalia.