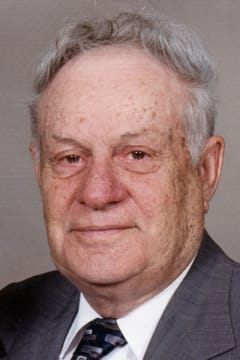 Blaza "Gus" Hejtmanek, 96, of Sedalia, MO passed away Monday, August 17, 2020 at Bothwell Regional Health Center in Sedalia. He was born on September 2, 1923 in Clarkson, NE a son of Joseph and Anna (Cerny) Hejtmanek, who preceded him in death.

Blaza was a member of Epworth United Methodist Church. He served his country honorably in the United States Army during World War II. Gus worked at First Baptist Church as the maintenance supervisor for many years. He later worked for Hayes Wheels as material controller and forklift driver retiring in 1991.

Gus was an avid Kansas City Royals and Chiefs fan. He enjoyed traveling, camping, playing cards, and gardening. After retiring, he took up helping his wife with cutting out pieces for her quilting.

In addition to his wife and parents he was preceded in death by a son, Danny Hejtmanek; a grandson, Adam Strodtman; two brothers, Emil Hejtmanek and Joseph Hejtmanek; a sister, Elsie Krajicek.

Graveside service and burial will be held at 1:00 p.m. Thursday, August 20, 2020 at Highland Sacred Gardens with Rev. Dan Hankins officiating. Full military honors will be conducted by the United States Army and Sedalia VFW Post #2591.

Memorial contributions may be made to Epworth United Methodist Church in care of Rea Funeral Chapel.

I am so very sorry to hear of your Dads passing Chris. Keeping you and your family in my thoughts and prayers during this difficult time!
- Tammy Fox
I can remember Blaza and Ardella whenever we went to the annual get-together of the Hill family in the 60's. My condolences to Carol and Chris and their families.
- Mark Montgomery