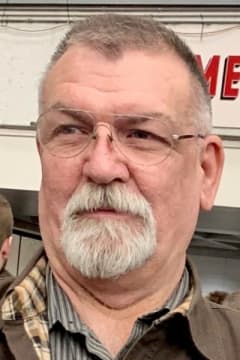 On October 3, 1975 in LaGrange, MO he was united in marriage to Ruth E. Dotson, who resides in the home.

Billy was a 1974 graduate of Smith-Cotton High School. He enjoyed going to steam engine shows and target shooting with his son, playing pool with his father and wood working. Billy worked for Maxion Wheels since 1997 where he was a Maintenance Generalist.

In addition to his wife he is survived by his father, Wayne Hutcheson of Sedalia; two children, Agusta Cribelar (Doug) of Kansas City, MO and a son, Dale Hutcheson (Anita) of Sedalia; a brother, Don Hutcheson (Sharon) of Sedalia; and two grandsons, Alex and Ryan Cribelar.

He was preceded in death by his mother, Vera Hutcheson.

In lieu of flowers memorial contributions may be made to the Sedalia Animal Shelter in care of Rea Funeral Chapel.

So sorry for your loss
- Charles Balch
I am shocked and saddened by Bill's passing. He was a great friend and a co-leader in the Scouting program. My sincere condolences to his Family, and prayers for their healing during this sad time. Bill was always a friend you could count on.
- Levi Moree
I am deeply saddened by the news of your loss. I grew up with Billy, I always thought of him as a good man and friend , he will be missed by many. Please accept my sincere condolences .
- Debbie Wissman
Sorry to hear of Bill passing. I worked with him at Maxion Wheels,he was a good friend.Our prayers are with his family
- Jerry Helphrey