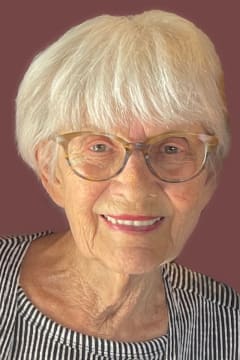 Betty Jane Friedebach, 77, of Overland Park, KS, formerly of Stover, passed away Friday, November 19, 2021 at St. Mary's Hospital, Jefferson City, MO. She was born on June 28, 1944 in Jefferson City, the daughter of Lovel Brown Swinney and Della Ester (Walker) Swinney, who both preceded her in death.

Betty grew up in St. Louis, MO while also frequently visiting cousins in Jefferson City, MO. She graduated from Webster Groves High School in St. Louis, MO. She earned both her bachelor's and master's degrees at the University of Central Missouri. Betty chose the University of Central Missouri because her father was a railroad conductor making almost daily stops in Warrensburg. Betty was extremely close to her father, who raised her as a single parent until her early adolescence, at which point Lovel married Della Ester Walker, an excellent seamstress, cook, and loving mother.

Betty was raised Baptist and converted to Catholicism during college. She was influenced by a best friend’s family to explore Catholicism. Her relationship with God was important to her and she was a devout Catholic, attending Mass regularly. She enjoyed singing in church and was an active participant in Mass following along with the readings and enthusiastically offering peace to those around her. She brought God’s love to everyone she met and was an example to her family through the way she lived her life. She had a strong personal moral compass while also exemplifying forgiveness and acceptance through her actions.

In June of 1965 Betty married former husband James Friedebach and to this union two daughters were born: Jessica and Katherine (Katy). After graduating from college, Betty taught for a few years in Kansas City before relocating to Sedalia, where she started teaching at Stover High School. In 1985 Betty moved to Stover, MO and raised her daughters as a single mother, nurturing their academic and extracurricular interests.

Betty was an exceptional educator, dedicating her career to the students and community of Stover. She often said she first chose a career in teaching because it was an area of focus at the university she attended, and was surprised by how much she loved it! She was a natural teacher, impacting the lives of many students both inside and outside her classroom. She had a gift of connecting with students in a way that was authentic, accepting, and loving. She created an environment where kids from any background could see their value and potential through her eyes. Many students have credited Betty’s influence as impactful in their successes today. Betty loved classical music. She had a lively classroom full of interesting topics and posters, which inspired many writings, including the notorious poetry notebook. She was also a speech and drama teacher, helping students showcase their talents. Nurturing their growth with candid feedback, Betty built a program which produced the first ever State Finalist in speech and drama from Stover, MO. The school would go on to continued excellence in this area. She loved to watch kids perform and she directed many plays such as Oklahoma, Seven Brides for Seven Brothers, and Our Town. Betty was very generous with her gifts as a teacher; she helped numerous students raise their ACT scores just by spending extra time with them. She also taught GED at the prison in Tipton, MO. She enjoyed her students there and found them to be respectful and motivated. Betty was driven to engage those who had barriers to overcome, and she ensured they had someone in their corner to cheer them on to success. Betty also enjoyed the friendships she made with faculty and graduated students. She had fun with the other teachers and frequently shared stories from her days teaching.

Upon retirement, Betty assumed a new vocation raising grandchildren. She sacrificed and served her daughters, supporting their children and careers. She raised a second family from babies through adulthood while running a happy home. Everyone who met “MoMo” loved her. She drove kids everywhere; cooked numerous meals, often times catering to specific tastes; and brought life to every corner of their home. She moved to many locations in this phase of her life, including Warrensburg, MO; Jefferson City, MO; Lenexa, KS; Overland Park, KS and Parkland, FL. Upon returning from Florida, Betty had the opportunity to spend all of her time with either her daughter Katy in Overland Park, KS or with her daughter Jessica in Stover, MO. She was happy to be able to spend so much time with both of her children’s families. She continued to live a thriving life, playing games with her grandkids, reading books, watching her favorite TV shows, and being the independent woman she had always been.

The Rosary will begin at 12:00 p.m., Saturday, November 27, 2021 at St. Vincent de Paul Parish Sacred Heart Chapel. The family will receive friends following the Rosary. A Mass of Christian Burial will be held at 1:00 p.m. with Father Mark Miller officiating. Inurnment will be at Centertown Cemetery, Centertown, MO at 3:30 p.m.

Memorial contributions may be made to the family to be used for a scholarship for Stover High School graduating seniors, in Betty’s honor.