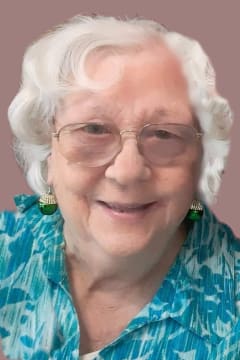 Barbara Anglin, 89, of Sedalia, MO passed away Tuesday, May 11, 2021, at Rest Haven Convalescent Home in Sedalia. She was born on August 20, 1931, in Manchester, England the daughter of Oscar Engleby and Elsie (Todd) Engleby, who preceded her in death.

Barbara worked in retail most of her life and most recently she worked as a sales clerk at the Sedalia Walmart Super Center. She was an avid lover of all animals, large or small. Barbara had a green thumb and loved being outdoors planting flower gardens and working in the yard. She enjoyed getting together with the ladies of the English Muffins Club once a month to have tea and breakfast. Barbara was an avid reader and enjoyed a good novel. She lived the last 50 years in Pettis County. Barbara will be greatly missed and fondly remembered by all who knew and loved her.

In addition to her husband and parents, she was preceded in death by a sister, Dorothy Ward.

A Celebration of Life gathering of family and friends will be announced at a later date.

Memorial contributions may be made to the Sedalia Animal Shelter in the care of Rea Funeral Chapel.

So very sorry for your loss. Lifting you and the family up in prayer. I remember stopping by your mom's house with you when we were going to school at State Fair and getting to meet her and her fur babies. She was a sweet lady.
- Patricia Chism