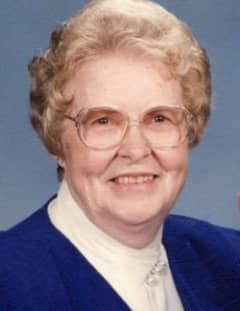 Velma Marie (Carver) Ciprian, 96, of Sedalia, MO, passed away Monday, September 16, 2019 at Sylvia G. Thompson Residence Center. She was born on December 17, 1922 in California, MO, the daughter of Herman and Nora (Wood) Spring, who preceded her in death.

Velma was a member of First Baptist Church, Sedalia. She worked for numerous factories in Tipton and Boonville, and owned and operated Carver’s Cafe in Syracuse for ten years. Velma enjoyed baking pies and cooking.

In addition to her two husbands and parents, she was preceded in death by two sisters, Gertrude Bieri and Dee Finger; and a baby brother in infancy.

Visitation will be one hour prior to service time.

Burial will be at Syracuse Cemetery, Syracuse, MO.

Special Thanks to Sylvia Thompson and Crossroads Hospice for the wonderful care that they gave Velma.

Memorial contributions may be made to Crossroads Hospice, in care Rea Funeral Chapel.

I remember getting to gather at your mom and dads with the syracuse group: I was the baby but Jerrrylynn, Jane, Tammy and yourself(Billie) always made over me! As years went on her and Grandma Gladys visited alot and she was an important part of our life. She always had a kind heart and a smile on her face. Growing up in Syracuse had alot of wonderful memories. Jeannie (Miller) Tuttle
– Jeannie Tuttle