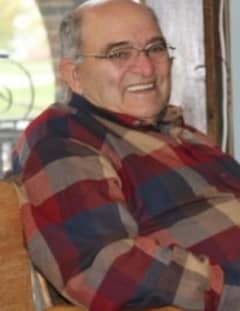 Raymond Duwayne Widel, 85, of Cole Camp, MO formerly of Blackwater, MO, passed away Thursday, April 25, 2019 at Good Samaritan Care Center in Cole Camp. He was born on October 27, 1933 in Blackwater, MO the son of AR Widel and Kathryn (Bouleware)Widel, who preceded him in death.

On March 26, 1953 in Crawford, NE, he was united in marriage to Mildred Vada Nation, who survives of the home.

Raymond was a life long resident of Blackwater, MO. He owned and operated Widel Construction based out of Blackwater for over 40 years. Ray was a man of great faith and serving God was the most important part of his life. He enjoyed fishing and was an avid rock collector. Ray never met a stranger and always made everyone feel loved.

He was preceded in death by a son, Bob Widel; a granddaughter, Olivia Widel; and a great grandson Elijah Sitton.

A funeral service will be held at 6:30 p.m. Sunday, April 28, 2019 at Blackwater School with Brad Holman and Jon Knochenmus, officiating.

The family will receive friends from 5:00 p.m. until service time at Blackwater School.

A private family burial will be at Lamine Cemetery.

Raymond is one of the kindest men God has graced my life with. He and Mildred have always been so good to me and my family, welcoming us into their home as though we were family for more than 40 years. The world has lost a wonderful man but heaven has gained a great warrior for God. I will miss his wonderful smile that always brightened my heart. May God comfort the wonderful Widel family with His love and the happiest of memories. I will love you all forever… Tim K.
– Tim K. King
I’ve had the very special privilege Of knowing this lovely, loving Family for most of my life and all of my married life. Such wonderful memories of all of the family. It never mattered if you were ‘blood kin’ you were still their family and always welcome. He will be missed so very much but find comfort in knowing he was faithful to the very end. Love ya’ll bunches and bunches precious ones
– Irene Simpson
Dear Mildred and Family, I fondly remember you and Raymond always being such hospitable and loving friends. When I worked for Ray I had my feet under your dinner table many times. Good food and good people in your household, and I thank you so much for those memories. The two of you raised five kids, I also think so very much of, Ronnie being one of my best buddies. All of you are in my thoughts and prayers. There is no doubt Ray’s big smile has been welcomed with open arms in Heaven. This separation is only temporary. God bless, Love Steve & Elizabeth
– Steve Stith
When y’all said he never knew a stranger, I experienced that first hand, the first time I met him I instantly felt like I was part of his family!!! So sorry for your loss Widel family!!!
– Ed Segar
Appreciated Raymond and Mildred so much. Somehow it doesn’t seem sad to know he has gone on to a great reward, it seems more like victory. But feel for all those suffering the separation, and think of you much.
– Marsha Kiser
How could I ever forget the Widel family knowing his parents and Raymond being such a tease with a broad smile and sharing a heart of love, said to me when I left their place for WI “ you shape up or ship out”. He had a great influence on my life encouraging me “i have the best”. Thankful for precious memories My heartfelt sympathy Love Gloria
– Gloria Edwards
Two things come to my mind when I think of Raymond….his wide ear to ear smile, and his deep voice calling to his wife, “Mil”. He was willing to step down when it was time, and was always interested in others and their growing faith. I always enjoyed time in their home. Was just thinking about Raymond and Mildred yesterday, wondering how they were doing. With love, Kaye
– Kaye Petersen
Remembering Raymond brings me back to when I arrived in MO in 2000. He and Mildred were the welcoming hosts at convention. Watched them down size a few times and still keep an interest in Preps and convention there. His love for his family was outstanding. But that extended far beyond the family circle. Many thoughts will visit you from MN. Love and care. Glenda.
– Glenda Pickering