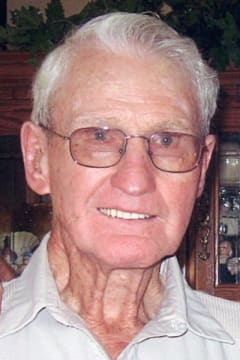 Ralph Rollie Thomas, 97, of Sedalia passed away Wednesday, May 13, 2020 at The Missouri Veterans Home, Warrensburg, MO. He was born on April 30, 1923 in Pettis County, the son of Rollie James and Bessie Elizabeth (Brownfield) Thomas, who preceded him in death.

Ralph was born and spent his entire life on the farm. He went to Smith-Cotton his junior year, so he could play football and graduated in 1941.

He served his country proudly during WWII. He always said that upon hearing a train whistle while working with his father one day he felt like it was calling him to do his part to help win the war. On December 1, 1942 he joined the US Navy serving on the sub tender ships USS Denebola and the USS Apollo first in the Atlantic theater then moving to the Pacific. His rank was Electricians Mate 1st Class being discharged on February 5, 1946.

He bought the family farm from his father in 1947 and on March 13, 1948 he married Darlene Oehrke at The Smithton Methodist Church. Together they raised 4 boys and were married for over 72 years.

He always said that the hogs paid for the farm. He also had a Grade-A dairy herd and milked for 42 years. For a few years, he raised Reeds Yellow Dent seed corn and after the dairy he ran a beef herd until 2009. He lived and breathed farming and was the quintessential farmer. Mornings always started before dawn and often ended late into the night year around, rain or shine. He loved bailing hay with the sweet smell of the cut grass, working with the family and friends helping him, and the clean look of the fields afterward.

When he “started” to slow down he began hunting. Every Spring and Fall Roy and Dave from Oklahoma would come to hunt with him. They had many great adventures together and he loved talking about them.

Ralph served on the Smithton school board for 9 years, and as President for 4 years. He also served on the Farmers Mutual Insurance board as Vice President.

Ralph did not know a stranger, he always stopped to speak and shake hands with people. When he would ride in the car, he would always wave when he met someone on the road.

He truly loved God and his church. He served as deacon for over 60 years and taught Sunday school for high school boys for many years. He was a member of New Hope Baptist Church.

A memorial service will be announced at a later date.

So sorry for your loss. Ralph will definitely be missed by all. Praying for your entire family.
– Tina Luper
Lisa and I will always remember Ralph’s wonderful smile and strong handshake. He was truly a man who loved the Lord! Praying for you guys.
– Duane Duchesne
Otis, Zeb, and the Thomas family. sorry for your loss. I remember the family of Rollie & Bessie Thomas as one of the many great Hughesville families, and thank them for their service to their communities and country. Wendell Olson
– Wendell Olson
Oh, how I wish our parents went back to Missouri more than just when I was 2! We met again when Aunt Darlene & Uncle Ralph came to visit us in San Diego. I was smitten! Uncle Ralph was the most genuine human being I ever encountered in my life! So fun and funny and had the ability to make me feel like I was the most special person! I’m sad he’s gone. People like him only come along once in a lifetime. I will be there to celebrate his life and finally meet my Dad’s side of the family. My sincere condolences to my Aunt Darlene & all of my cousins. Rest In Peace in God’s Embrace Uncle Ralph.
– Karen Rutherford
So sorry to hear about Ralph passing. He sure was a very nice friend to everyone! I enjoyed visiting with him at church. God Bless Deanne and Dwight Wiskur
– Deanne Wiskur
Dear Darlene, Karis, Dewayne, Chris, and families, Ralph always got me smiling. He would call me from the dairy barn to see what scoop I had about school! He was a dandy, and will be missed by everyone that knew him! RIP, Ralph
– Jana Birdsong
Remembering Ralph with fond memories. Thinking of the Thomas family in this difficult time.
– Linda Hodge
So sorry to hear, I always enjoyed hauling hay for Ralph. He always had the best advice when you needed it the most even if you were a teenager and didn’t need it. Most of all I am thankful for being known as ” Lonesome George ” .
– George Garrison
May the wonderful memories sustain you all in the days ahead. A life well lived and loved. Karla Gibson Billings
– Karla k Billings
Always enjoyed visiting with Ralph. Our sympathy and prayers are extended to the Thomas family, sorry for your loss. Rudy, Jeff and Tonalea Rehmer
– Jeff Rehmer
Ralph was a one of a kind person. He will be greatly missed . Prayers are with the entire Thomas family. Thinking of you…..Sincerely Ron & Sandy Otten.
– Ralph Thomas