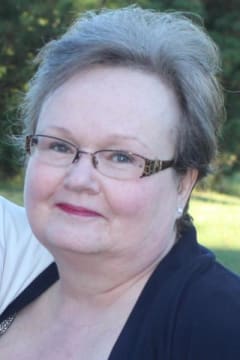 Melody Lynn Chapman returned to her heavenly home on Monday, April 27, 2020 after a valiant battle with a long illness, surrounded by her loved ones. Her devotion to her family and her firm belief in God supported her in her struggle and ultimately gave her peace.

Melody was born on April 13, 1961 in Sedalia, MO to Bill and Grace Helvey. She graduated high school in Sedalia, MO in 1979. Melody began her college career by graduating with her AAs in Business Management from State Fair Community College in 1988. She graduated from CMSU in 1990 with a Bachelor of Science degree in Education. She furthered her education by receiving her Masters of Science Degree in Education in 1996 from CMSU.

She spent her professional career working for the Sedalia Chamber of Commerce from 1991-2007 as the Director of the Convention and Visitors Bureau. Melody, worked closely with her colleague, Debbie Biermann, turned best friend were both instrumental in the restoration project of the Katy Depot. Melody later worked for State Fair Community College as the Director of Lifelong Learning from 2007 until her retirement in 2014.

Melody has been a significant influence in the lives of her many grandchildren and enjoyed spending time with all of them. She also had many hobbies that she shared with her family and friends. Among those loves were; fishing, gardening, trains and traveling.

Melody’s first union of marriage was in 1979 and to this union, two children were born, John Paul and Justin Robert. Her role as a mother was the most rewarding accomplishment of her life.

On May 31, 2002 Melody was united in marriage with the love of her life, William Clay Chapman. They spent their marriage traveling throughout the United States and Canada, going to new restaurants, and fishing anywhere they could. Upon her union with Bill, she also gained three bonus children, Jessica Cline, William Chapman and Christina Obiero.

A Celebration of Melody’s life will be held at 6:30 pm, Friday, May 1, 2020 at Rea Funeral Chapel, Sedalia with Michael Wright officiating.

Family will receive friends one hour prior to service at the chapel.

In lieu of flowers memorial contributions are suggested to SCHS Team Scream.

So to say she was a very vital part of what I accomplished during my years in Sedalia, MO, is without question. I could list many things she and I did together to promote tourism in Sedalia … and around the State … but the best way to put it …. She was a true “partner in crime” when it came to promoting all the wonderful things our area had to offer. My deepest, and heartfelt condolences to the whole family …
– Tony Czech
Sorry about your loss. Thoughts and prayers go out to the family.
– Kristy
My prayers and thoughts to Billy and family. Mel was an awesome lady who I know is looking over you. She is with the Lord and with mom and family. Love you all.
– Gail Chapman
My sincerest condolences. I only knew Melody for such a short time, and in that time, she changed my life and all I knew about my life forever. I will miss her greatly.
– Debbie Byrd
I am so sorry for your loss and sadness, but am happy for Mel that she is no longer suffering. Along with Deb, she was such an important piece of making the renovated Katy Depot a reality and the wonderful community asset we enjoy today. She will be fondly remembered by so many of us.
– Joe Fischer
I was blessed to have worked with Melody when she was at the Sedalia Convention and Visitors Bureau and at State Fair Community College. Mel was an intelligent, loving lady and a good friend. I’m so sorry for the family’s loss and will keep you in my prayers.
– Garnetta
So sorry to learn of Melody’s illness and passing. I first met her when she was with the convention and visitors bureau. We were in different departments, but worked together some when she was at SFCC. She was always thinking of the best solution to a problem.
– Laura Taylor
I am so sorry for your loss.
– Linda Church
I haven’t seen Melody for years but have fond and fun memories of her in the POETS club when our kids were still in school! I was so sorry to hear of her passing and extend our deepest sympathies to her family. Marilyn & John Guffin
– Marilyn Guffin
I appreciate the strong foundation Melody set for the Sedalia Convention and Visitors Bureau to move forward. I first met Melody before moving to Sedalia. I served with her on a Missouri Division of Tourism Cooperative Marketing Committee in the 90’s and quickly respected her intelligent mythology. I along with the others on the committee valued her ability to rationalize tourism issues and find the right solution. R.I.P. Melody.
– Carolyn Crooker
I am sorry to learn of Mel’s passing but am happy for her to no longer have pain. Peace be with her family during this time.
– Terri Ballard