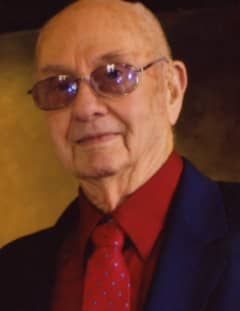 Marion Edward Schmidt, 102, of Sedalia, MO, passed away Friday, January 3, 2020 at Bothwell Regional Health Center in Sedalia. He was born on December 4, 1917 in Sedalia, the son of Edward A. and Maggie (Ashbrook) Schmidt, who preceded him in death.

Marion was a charter member of New Hope Baptist Church where he served as the senior adult men’s Sunday School Class teacher, a Trustee, and Deacon Emeritus. He worked as an insurance sale representative for The Western and Southern Life Insurance Company until retirement. Marion love fishing and all types of music. He served his country honorably in the United States Army during World War II. Marion lived most all of his life in Sedalia.

In addition to his wife Ruth and parents, he was preceded in death by a son Butch Schmidt; a brother, George Schmidt; and a sister, Opal Cutler.

Burial will be at Crown Hill, Sedalia, MO with full military honors being conducted by Sedalia VFW Post #2591 and the Missouri Army National Guard.

Memorial contributions may be made to New Hope Baptist Church in care of Rea Funeral Chapel.

Sorry to hear of your Dads passing, we both had Drs. appointments out of town and could not make the services. But we would like you to know that you are in our thoughts and prayers. Steve and Peggy
– Steve Phillips
John and family, my condolences to you in the loss of your dad. Prayers for comfort
– Marilyn Bahner