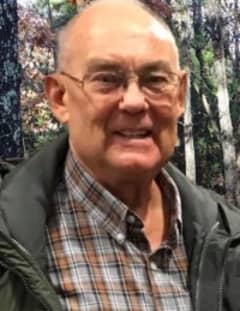 On February 2, 1980, in Potosi, MO he was united in marriage to Anne L. Wurtz, who survives of the home.

Jerry was a regular attendee of Maplewood Church in Sedalia, where he occasionally played the piano. Additionally, he played piano for Faith Baptist Church in Sedalia for several years. He worked as a Probation and Parole Officer for the Missouri Department of Corrections for over 25 years until retirement. During his time with the Department of Corrections, he was responsible for the firearms training and certification of probation officers. Jerry enjoyed hunting, fishing, camping, shooting guns, and spending time with his family, especially his grandchildren.

The family will receive friends from 10:00 a.m. until service time at the chapel.

Memorial contributions may be made to Maplewood Church in care of Rea Funeral Chapel.

Mike and family, so very sorry for your loss. Luv u
– Betty Huff
Only worked with Jerry for a couple of years 87-88, but he will be remembered as a very caring coworker.
– Tom Bauer
Praying for your family during this time and those times that will come to pass when your hearts are heavy. What a wonderful legacy Jerry left behind. He will be truly missed. -Joe and Michelle Sarver & family
– Michelle Sarver
Jerry taught me a lot when I was a new PO at the Hillsboro office in the early 80’s. We had a great group of staff who worked hard and enjoyed a lot of laughs. Jerry will be missed. My condolences to his family.
– Carla Naes
I had the pleasure of being Jerry’s secretary in Hillsboro for 5 years. We shared lots of conversations about our families. He always spoke so highly of his children and you Anne. He loved you all so much!!! I’m so sorry for your loss.
– Lori Burgert
I am so sorry to hear about Jerry’s passing. My condolences to his family and friends. I worked with Jerry in Hillsboro at probation and parole. I had great respect for him. May he Rest In Peace.
– Jen Klueppel
I am so sorry Anne. Boy those days in the 70s at P and P. We had fun. Jerry will be missed. Love you and praying for you all. Contact me sometime.
– Vicki Sanders