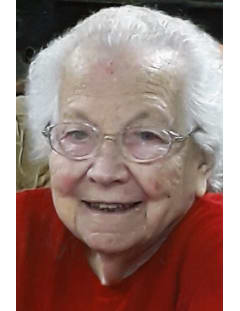 Fern Etta Balch, 86, of Sedalia, MO passed away Tuesday, April 7, 2020 at her home. She was born on July 20, 1933 in Sedalia, the daughter of Charley and Effie (Swearingin) Thomas, who preceded her in death.

On December 31, 1955 in Jefferson City, MO she was united in marriage to Charles Balch, who survives of the home.

Fern loved flowers, gardening, and cooking for her family, collecting redbirds, and NASCAR. She especially loved spending time with family.

Besides her parents, she was preceded in death by a daughter, Elaine Galloway; a brother, Winford Thomas; three sisters, Velma Leo, Lucille Porter, and Lavern Thomas; and a son-in-law, Wiley Galloway.

I remember when my grandparents were neighbors to Fern Etta and her husband Dub. When my sister and I were younger we would always stop by their house while trick or treating because they always had a special bag for us. She was such a sweet and considerate woman. My heart goes out to Dub and the family.
– Kaitlyn Beck
So sorry for your loss. You two were a great pair with such a nice family.
– Juanita Salmons
I have known Kathy since the eighth grade. Her Mom & Dad were always so kind and welcoming whenever I would come to their home. I know your Mom’s passing will leave a huge hole in your family and your hearts. Your Mom was such a sweet, kind lady. Thinking of you all at this time. Nadene Colbert
– Nadene Colbert
Dave and I want to extend our sincere sympathy to your family for your loss. You kids grew up next to us, babysat for us , played with our kids and your folks both helped us in so many ways . Our thoughts are with you.
– Helen Gillespie
Our sincere condolences to the family.
– Lisa James
Dub and family, my thoughts and prayers are with you all at this difficult time.
– Dorothy Schroder
Sorry for your loss prayers for family
– Earl Billingsley
Fern Etta was a teenager, and I was a 5 year old when she and her sister, LaVerne, were children workers at East Sedalia Baptist Church, the church where I grew up. I fondly remember how sweet and gentle the Thomas sisters were with we children. My sincere sympathy to the family during this difficult time. May God bless and keep each of you.
– Marilyn Owens