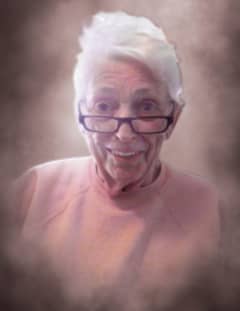 Dessie Ann Schroeder Dowdy, 82, of Sedalia, MO passed away Monday, September 9, 2019 at EW Thompson Health and Rehabilitation Center in Sedalia. She was born on July 31, 1937 in Houstonia, MO the daughter of Marion and Woodrow (Smith) Belsha, who preceded her in death.

On August 28, 1998, in Eureka Springs, AR, she was married to Franklin Conn Dowdy, who preceded her in death.

She was preceded in death by her parents; husbands; two sisters, Trudy Travis and Linda Fisher; and a son-in-law, Chris Jeffers.

Graveside service will be held at 11:00 am, Wednesday, September 18, 2019 at Highland Sacred Gardens, Sedalia, MO with Rev. Dan Hankins officiating.

Always a cheerful smile and a positive attitude. Dessie will truly be missed by all.
– Mark Burtis
What a fun gal. So sorry for your loss.
– Janet Proctor
Dear Sandy and Family, what a whirling dervish of a Mom Dessie was. Her bubbling personality and smile will not be forgotten. We had some good times a while back with she and Frank. RIP, fondly, Pam McGrath
– Pam McGrath