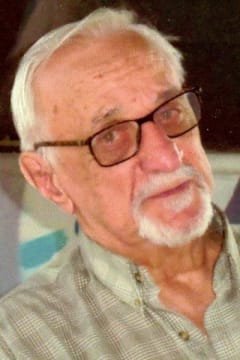 Charles “Chuck” Dean Nutsch, 82, of Sedalia passed away Thursday, April 30, 2020 at his home. He was born on March 29, 1938 in Morrowville, KS the son of Albert and Gertrude (Krischke) Nutsch, who preceded him in death.

On February 14, 1971 in Overland Park, KS he was united in marriage to Arlyss Hogan, who survives of the home.

Chuck served his country honorably in the US Air Force.  He worked for Boeing in Wichita, KS and Everett, WA, Knight-Ridder Financial of Leawood, KS and for the C.R. England delivery company. Chuck’s retirement was spent in Olathe, KS, Sedalia, MO and Belize, Central America. He enjoyed nature and being outdoors, with fishing, boating, water sports (especially skiing), hiking and bird watching among his interests. Chuck’s friends and family knew him to play a keen hand of double deck Pinochle (military sytle). Most of all, Chuck loved spending time with his family.

Besides his wife, he is survived by three sons, Jeffrey Easterberg of Belize, Central America, Thomas Easterberg of Sedalia and Michael Calcutt of California, MO; one daughter, Dana Madsen Calcutt of California, MO; four grandchildren, Cale Madsen, Seth Beck, Alexis Beck and Ryan Calcutt; a sister-in-law, Winifred Nutsch of Morrowville, KS and many nieces and nephews.

Besides his parents, he was preceded in death by three brothers, Francis, Ed and Harold Nutsch; one sister, Helen Nutsch Oliver; and one grandson, Colin Madsen.

A Celebration of Chuck’s life will be held at a later date.

Honor the life of Charles Nutsch

Please share a condolence, photo or memory of Charles. We welcome all condolences that are positive and uplifting that will help family and friends heal.