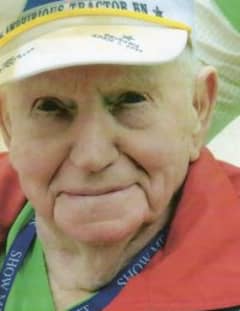 Mr. Palmer served his country honorably in the United States Army from January 7, 1943 until January 8, 1946. He served in the South Pacific with the 718th Amphibian Tractor Battalion. He made the first wave invasion of Leyte, Philippine Islands and the first wave Invasion of Okinawa.

Mr. Palmer started Palmer Tool and Supply in 1951, he retired in 1986 and sold the business to his two sons, Lanny and David Palmer.

Besides his wife and parents, he was preceded in death by a son, Charles Jerry Palmer.

A Celebration of Life Service will be held a later date. Cremation Services are under the direction of Rea Funeral Chapel, Sedalia.

Memorial contributions may be made to the East Sedalia Baptist Church Building Fund in care of Rea Funeral Chapel.

Please accept my deepest sympathies.
– Kevin J. Menefee
Sorry for the loss of your Dad, Robert and Janet Tucker, Betty and Lowell Mayfield & families
– Robert Tucker
So sorry for your liss
– Nancy Evans
I’m so sorry to hear this . I will miss our talks and his life and his dad’s barbershop on engineer that my family owned also from 1965 to present, even though we moved our barbershop 3 yrs ago. Prayers for all the family
– Barry Walter