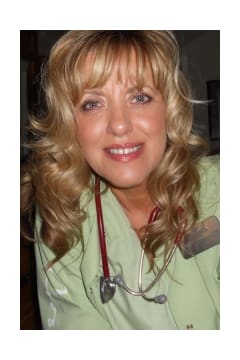 On July 5, 2011 in Sedalia, MO, she was united in marriage to Moses Martinez, who survives of Wheatland, WY.

Carrie was a 1978 graduate of Smith-Cotton High School. She worked at Lamy’s Manufacturing for over 17 years. In 2000, she graduated from State Fair Community College as an LPN and specialized in Alzheimer’s and hospice care. After graduating from SFCC she worked various nursing positions. The highlight and most recent of those positions was working as a green angel for Crossroads Hospice. Carrie was a compassionate nurse, loving mother and grandmother, and devout Christ follower. Her children and grandchildren were the pride of her life and she enjoyed spending each day with them. She loved the Lord and was passionate about worshiping Him, even into her final moments.

Besides her parents and husband, she is survived by two children, Aaron Balke (Ashley) of Whitestown, IN, and Amber Herrick (Jacob) of Sedalia; five grandchildren, Hayden and Ella Herrick, and Jude, Jubilee, and Asa Balke; three brothers, David Norphy (Cindy) of Greenbrier, AR, Frank Norphy of Independence, MO, and Dino Norphy (Kim) of Kyle, TX; two sisters, DeAnna Vansell-Sabin of Salem, OR, and Rhonda Taylor (Brian) of Salem, OR; and four nieces, Angela, Autumne, Shelby, and Evelyn.

She was preceded in death by two sisters, LaDonna Hughes and Vicki Norphy.

Burial will be at Crown Hill, Sedalia, MO.

My deepest sympathy to the family. Prayers are with each of you during this sad time.
– Janet Proctor
Uncle Ronnie, Aunt Norma and family, so sorry for your loss. My prayers are with all of you.
– Theresa Strahan
Sympathy goes out to Carrie’s family. She shined a beautiful light and was loved by all those she met. She will be missed.
– Tracy Viles
So sorry for your loss! She was a beautiful person. Prayers to the family. Janice Bennett Maui Hi
– Janice Bennett
So very sorry for your loss. Our deepest condolences and sympathies to you and yours Norphy. Praying Jesus wraps his arms around you and gives you peace, strength and comfort. We love you and Cindy. Lucky and Angel Page
– Angel Page
Prayers for the family. Even though I haven’t seen you in years, I always thought of you. You were a good friend to me. Always treasure our friendship. You will be missed! Joann
– Joann Husong
I’m so sorry for your loss. My prayers are with the family at this time of sorrow. God blessing for strength. I know the pain of the loss of a child and know the strength through God to get through each day
– Barry Walter
My deepest sympathy and prayers to you all!!
– Jodi Weikel
I am so sorry for the beautiful light you lost. I am praying for the whole family. God Bless
– Patricia Debo
Carrie you have touched my heart so much over the years, we shared a lot of great memories together. You will forever be missed! I love you my friend
– Dede DeMois